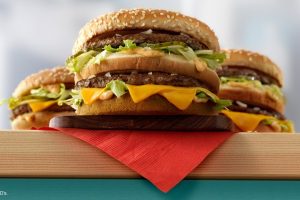 Let’s face it McDonald’s or Maccy D’s doesn’t have the greatest reputation.
While we all have fond memories of this childhood staple, the golden arches can represent something few of us would include in our New Year diets or brag about eating to our foodie friends.
More a hangover treat or a bad day pick me up, a big question mark has loomed about the fast-food giant’s meal ingredients for some time. While the world -famous chain has gone to great lengths to convince us that their ingredients are of the highest quality, many people are still unconvinced.
“Have you seen what they put in that junk?” That’s where Dutch chef, Jaimie Van Heije got involved. He decided having visited a factory in Germany, that he would create a Michelin star meal for his colleagues, based on the very same ingredients used in the Big Mac meal.
Thats right, he was so impressed by the quality of the stuff that goes into a Big Mac, that he decided to deconstruct the humble hamburger and make a dish suitable for a king, not a burger king though.
Check out what you could be eating if Brian on fries and shakes got creative in his lunch break. Voilà !

THIS CAT WITH A HEART PRINT ON HER CHEST IS A CUTENESS OVERLOAD.

SHE WAS OUT WAKEBOARDING WHEN THIS HAPPENED. KEEP...

Video: Woman Cooks A Whole Chicken In Her...

World Reimagined In Crazy Film That Will Change...

THESE ADORABLE RESCUE HAMSTERS ARE THE CUTEST THINGS...

THIS SUPER HAPPY SQUIRREL VIDEO WILL MAKE YOUR...