Home News This Coyote Baffles Everyone After Getting Hit By A Fast Moving Car.
News

This Coyote Baffles Everyone After Getting Hit By A Fast Moving Car.

We all love animals, and would hate for them to be hurt in any manner.

So we were delighted to learn that one lucky coyote, defied the odds and survived after being hit by a car.
Georgie Knox of Airdie, Canada was travelling to work when a coyote flashed in front of her car, leaving her no time to break or swerve before making contact.

She documents the incredible story on Facebook, stating that she, ‘heard a crunch and believed I ran over and killed it’.

Incredibly, 20 miles later she finally realised what had happened to the poor animal.

Georgie says: “Upon stopping at a traffic light by my work, a construction woman notified me that there was, in fact, a coyote embedded in my car. When I got out to look, this poor little guy was looking up and blinking at me.”

Amazingly, the coyote had survived after becoming embedded in the front grill on her car.

Georgie alerted Alberta Fish and Wildlife Enforcement and they came and helped free the trapped animal.

Thankfully the coyote was unhurt so the officers released him into a park system, west of Calgary.

How-l lucky was this pup!

This Coyote was wandering around Airdrie in Canada when it happened to get hit by a car. 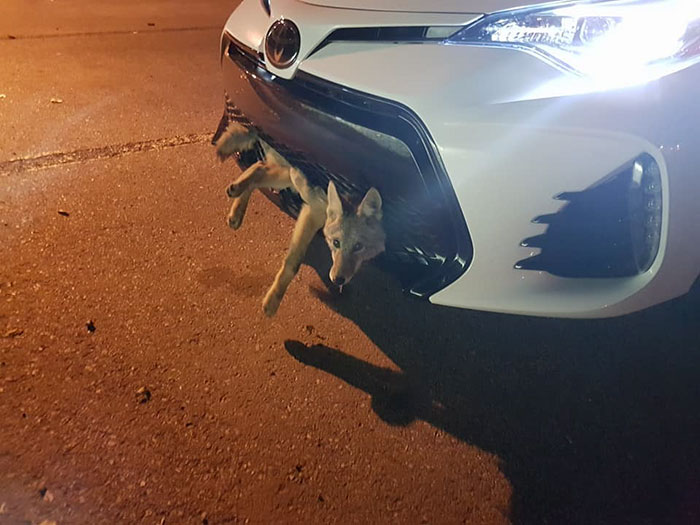 It went viral after Georgie Knox, the driver, posted the astonishing story to Facebook.

Some were delighted that the Coyote lived to tell the tale.

However others were questioning why Georgie didn’t stop when the collision happened.

Video: Woman Cooks A Whole Chicken In Her Office And It’s Pluckin’ Crazy

PUPPY LEFT TO DIE FOR BEING CLUMSY FINDS...