Home News The Rock Shows Appreciation And Meets A Boy Who Saved His Brother’s Life Thanks To His Movies.
News

The Rock Shows Appreciation And Meets A Boy Who Saved His Brother’s Life Thanks To His Movies. 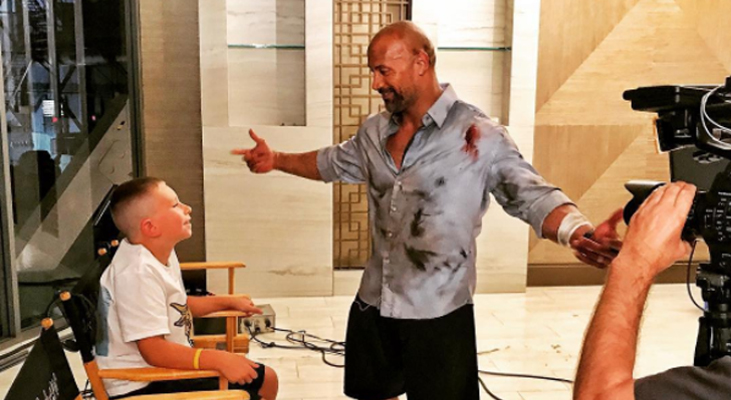 Let’s be honest, most of us wouldn’t mind getting a hug from Dwayne, ‘The Rock’ Johnson.

And this week the legendary actor and all-round nice guy surprised ten- year- old Jacob, a brave lad who saved his own brother’s life.

After finding his two -year -old brother drowning in the family swimming pool, plucky Jacob saved his life using a technique he learned from one of The Rock’s films.

The Rock had inadvertently taught him how to perform CPR, so as a reward for Jacob’s quick thinking actions, the actor flew him and his family to Vancouver, to visit the set of his upcoming film ‘Skyscraper’.

Ladies and gentlemen, I finally met this real life 10yr old hero, Jacob O'Connor. He rescued his 2yr old brother after finding him facedown in their pool. I said, not only do I shake hands, but when I meet heroic kids, I give hugs.. now get in here. Despite the fact I looked like 9 ways of hell, battered and bloodied from my scenes, Jacob reluctantly, gave me a hug. ???. A very special day we had on our #Skyscraper set. #JacobOConnor #Hero

Writing on his Instagram post, The Rock said: “Not only do I shake hands, but when I meet heroic kids, I give hugs. Despite the fact I looked like 9 ways of hell, battered and bloodied from my scenes, Jacob reluctantly, gave me a hug.”

He then made another post declaring how special the day had been.

Jacob was super nervous and shy the whole time we hung out, so it was fun getting him to laugh and talk. He threw me for an unexpected spin when he showed up on set wearing a shirt that he proudly made with my bull insignia on the front and on the back was the picture of me holding our two puppies, Brutus and Hobbs, after I rescued them from our pool. Seeing that picture on this boy's shirt, got me in the gut. Eventually, we would lose Brutus to heaven, but it wasn't the picture of Brutus that made me tear up, it was the fact that this 10yr old kid, had a heart big enough to put our puppies on his shirt after he saved his little 2yr old brother's life. What a special day. What a special kid. Thanks Jacob for being awesome and for being the kind of person we all aspire to be. ~ DJ

He even made a post of appreciate for the Mother of Jacob, Christa.

Big Rock hugs for mama Christa O'Connor. As you can imagine, she's so proud of her son and even more, so grateful to have her boys. She told me that at first she wondered "Wait, I am just calling Jacob a hero because I'm a proud mom and he's my son? Then I said, no wait.. he IS a real hero for saving his brother's life". Amen. Yup, he sure is. Thank you so much Christa for flying out to Vancouver to allow us to meet you and your boys, Jacob and Gavin. We had a blast and grateful to have you on our set. #OConnorFamily #ProudMama

Teaching kids how to save lives through action movies is pretty awesome.

Could The Rock get any cooler?

These Daredevil Instagram Users Risked It All For These Anxiety-Inducing Photos.

This Man Has Stayed In Syria To Care...

I WORE MY ENGAGEMENT RING FOR OVER A...

Ikea Has Just Launched A Collection Of Pet...